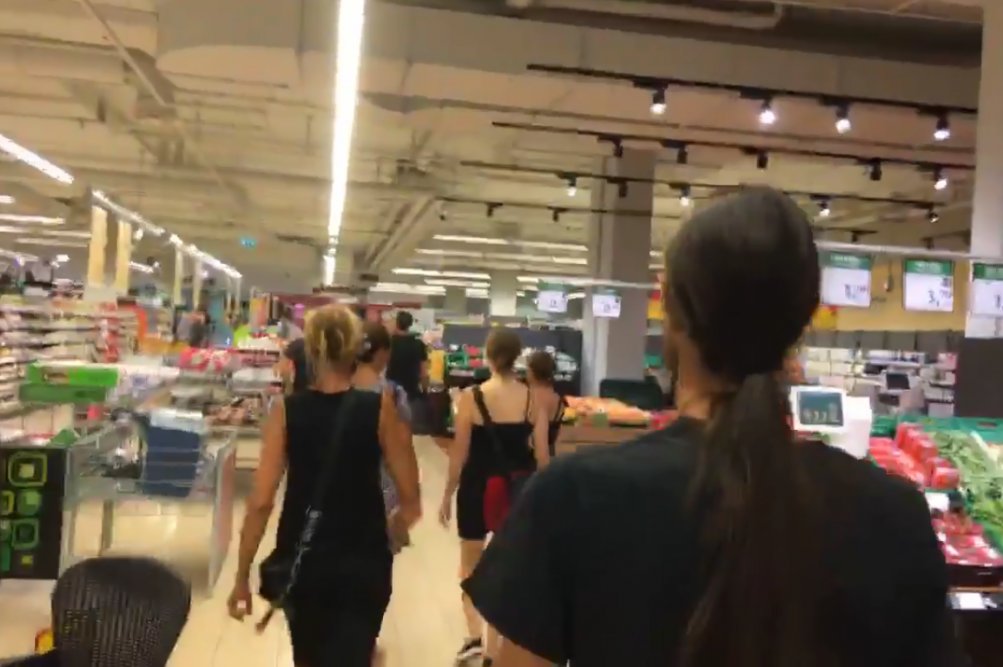 30 activists from around the world came together to disrupt a supermarket in Koper, Slovenia. People from Slovenia, Bosnia, Croatia, Italy, and France ... plus the organiser is from Mexico and we're from Australia! Fantastic team effort ✊ 21 of those activists were disrupting for the very first time! ~ This disruption didn't go as smoothly as we would have liked ... there were some technical difficulties, and we had to change location at the last minute for various reasons ... but as a group we learned some new things that we will all be aware of and do better next time. The point is, even if an action isn't perfect, do it anyway! ~ The security guard in the supermarket was also very aggressive towards Luca ... it got a little intense at times. At about 5 minutes into the livestream, he ran up to Luca and tried to knock the megaphone out of his hands, which ended up hitting the glass meat case very loudly! It was as though he waited until the cameras were not on him to do this. Luckily no glass was broken. This shows people who the aggressors are. We are simply trying to disrupt a place where products of violence are being sold. ~ We also want to clarify something that Natasha said in the livestream ... at around the 6 minute point a man came over to us, he was applauding the disruption and took a flyer for more information. Natasha got swept up in the moment and said "this is why we do this". That was the wrong thing to say. That is NOT why we disrupt. We are not trying to convince people to go vegan... we are simply trying to create social debate and make people think about the issue of animal rights and take a position on the issue. Whether people agree with the disruption or not, is beside the point. For every person who takes a flyer and supports the disruption, there may be 10 more who may yell at us and hate the disruption. So please ignore what Natasha said at that point (the adrenaline and emotion took over), and remember that disruption is not about trying to convince people to go vegan. Please watch this video on YouTube to learn more https://www.youtube.com/watch?v=NWHqJpcgjk0&t=20s ~ A big THANK YOU to all the activists involved! ❤️ ~ "Going vegan is not the most we can do, it's the least we can do" - That Vegan Couple.

Posted by That Vegan Couple on Wednesday, August 7, 2019